I’m currently doing a research project on LGBT+ experiences of homelessness and living in the most deprived neighbourhoods in Scotland – more details here. It has been funded by the British Academy and is quite small. I was aiming for 30 participants in total. I have found it really difficult to find participants, particularly young homeless people.

I did expect this to be the case – I’m working with a subset of a small(ish) population. Estimates are that a quarter of young people between 16-25 are homeless at some point, by the broadest definition (i.e. falling out with their parents and crashing on a mate’s couch). The Albert Kennedy Trust suggest a quarter of this quarter identified as LGBT+ (although there's quite a few problems with that). People often don’t realise they’ve been homeless, and might not be out, so might not define themselves within the target population. I figured using homelessness organisations would be a good gatekeeper organisations.

I contacted quite a few homelessness organisations and still struggled. So, I thought, where do gay people hang out and I might be able to recruit them? Grindr!

For those of you who don’t know, Grindr was one of the first dating apps. I believe it was actually invented by a straight guy who was impressed with how easily his gay brother managed to hook-up in the places he visited. You set yourself up a profile – picture optional, but it can’t be rude – and fill in other details (including your “tribe” [otter, twink, bear etc. I’ll leave you to Google, but don’t blame me]; your preferred sexual practices [it seems versatile bottom is where it’s at, again Google if you don’t know], as well as age and height and other usual stuff. It’s location based, so when you open the app you get the photos of people in a grid with distance increasing as you go down. There is also a “Fresh Faces” bar at the top which lists recent joiners. You don’t swipe people away like Tinder, so it’s more like a chatting app.

I hadn’t intended to use it for participant recruitment. In fact I’ve been in a long-term relationship for 11 years, long before Grindr had been invented, so I had never actually used it. I had used the precursor website Gaydar (I can almost hear the wistful sigh from gay men of a certain age when you mention that) so I sort of knew what it was like. Anyway, I had to apply for a change to my ethics permission (form here for info) from my University’s General University Ethics Panel to use it. Before I got to this stage, Mark Holton at Plymouth University mentioned I should also check the Grindr terms and conditions. These are quite explicit on not using it for marketing, or to recruit people actively, but I wasn’t going to be doing this – I couldn’t tell if anyone was suitable for my research from their profile, so this was more lurking and seeing who approached me.

When I submitted my ethics application it was the week after Stephen Port had been convicted for murdering four young men he had lured to his flat using Grindr. This meant the main focus of the application was actually the risk assessment, particularly since it was a straight male colleague who would be doing the interviews – making sure that people recruited this way were met in public places and that I’d talked to them briefly over the phone to check everything was ok. This was on top of the usual assurances, such as making sure the researcher checked in-and-out-of interviews by text message. I also had to ensure the participants were consenting properly with full information. I was also aware there was a reputational risk to the University – I could chat people up on the app as a representative of my University. Therefore I also set out that after people messaged me on the app, I would move the discussion to email as soon as possible and provide them with full participant information then. The usual participation and consent procedures then kicked-in.


So I set up my profile, example below: 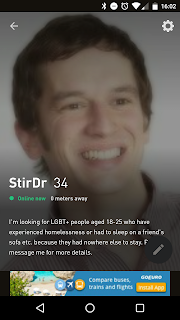 I changed it from that to asking if people lived in particular neighbourhoods in Edinburgh and Glasgow depending on what I was up to and where I was.
And, the burning question – how successful was it? Well, quite successful actually. I got 49 contacts by the time I wrote this blog post. Not all of them were interested in my research. More of that later. It took me a week to work out Grindr etiquette. I was expecting people to message me and say “I’d like to participate in your research.” However, you only ever start a Grindr conversation with “Hi”. My initial reply to these was an immediate “I’m only on here to recruit research participants”. After a couple of times it became apparent this was extremely rude, so it became a “Hi, are you interested in participating in my research?”

Quite a few of the contacts did fit the criteria, particularly people who had experienced homelessness, which was exactly the population I was looking for. The main problem was turning these into actual interviews. I found this paper about a sexual health project that had used Grindr to find people for a project about men-who-have-sex-with-men. They noted that they got a higher participation rate if they phoned people, not emailed them. I offered to phone or email in my message to people who said they would participate. They all wanted to be emailed. I would email. And then hear nothing. I have no idea why.

And yes, I did get people who just looked at my photo (I used a professional work photo where I do look quite cute) and messaged me for the very purposes Grindr was invented for. And so far, yes, this has also involved some extremely explicit messages. As a gay man, I was sort of expecting this to happen, but if you were to recreate this method of participant recruitment and went into this naïve and oblivious it would’ve come as a bit of a shock. A handful of other messages I got would’ve raised eyebrows out of the context, but with all of these I just ignored the messages, or if someone was a tad too persistent, I politely ended the conversation explaining I was only on the app to recruit research participants.

So, is it worth the effort to find research participants? LGBT+ people are roughly three per cent of the population, so they are pretty hard to reach. I have exhausted every single recruitment technique, apart from flyering gay bars on a Friday night, with this project and have still really struggled. Unbelievably even snowball sampling only got me two other participants (and one of them was someone’s partner and another someone’s sibling). Riffing on Michael Rosen’s book Bear Hunt I’ve been joking that “I’m going on a gay hunt, got to catch a big one”* and it really has felt like that. I think, like the public health researchers, if you were looking for people who were dating, or after no-strings-fun with a 9 inch top, for your research population, then it is definitely the place to find them. Otherwise, I think my research was a little too leftfield for your average Grindr user. They’re on it for a quick shag, or to meet the love of their life, not to discuss their housing circumstances.

I also swiftly realised there is ethnography to be done on how people present themselves on Grindr, and the rituals of introducing oneself on the app. A quick Google Scholar search identifies that this has been done. This raises the issue of how “public” social media is (as did this blog post). An ethics panel would probably not give you permission to recreate Laud Humphries’ famous Tearoom Trade participant observation of cottaging. Yet, we could probably do an ethnography of interactions in a gay bar with no issues, comparing, say, how gay men approach each other with how straight men approach women. People do not put themselves on Grindr to appear in a research project, and if I provided any more detail about some of the profiles I’d seen, people could feasibly identify them. A defence of being overly cautious on these issues is we live in a heterosexist society. As I am finding out in this project, we know next-to-bugger-all (pun intended) about the lives of LGBT+ people in very ordinary ways. As a social scientist, I believe the only way to do this is to do research, and this involves identifying people as LGBT+ and then asking them about stuff.

Anyway, this is all I have to say on the topic so far. This will be written up as a proper methods paper, don’t fear! Oh, and as I tweeted a while back – an idea for a novel: the protagonist is one of the random people that appear in someone else’s online dating profile, and a North-By-Northwest style mistaken identity adventure then starts.

*knowledgeable readers will get the many-levels on which that joke works.
Posted by Dr Peter Matthews at Friday, August 18, 2017