I'm currently doing a literature review, in the form of a realist synthesis, on middle-class activism and its impact on local public services. In the initial trawl of literature we found about 30 articles. An immediate, striking fact was that only researchers in education and rural housing regularly explicitly referred to the "middle-classes" as an important group in understanding patterns of service provision.

Anyway, because of the education stuff, from researchers like Gill Crozier, this morning's story about Academies and Free Schools being able to prioritise access for pupils receiving free school meals caught my eye. You hear the apocryphal stories of middle-class parents pretending to be Catholic and other things to get their children into good schools. But what evidence there is out there really does suggest that this is what middle-class parents do. What is worse, when this is done it often actively excludes others from school - such as working class or African American parents. Knowing this I can guarantee we will see middle-class parents hiding household income so they can get free school meals and get their children into a good school.

This is all very worrying. But one thing that struck me with the stuff I've read on education and rural housing is that it does portray a very stereotypical view of the middle-classes. In the latter case, it's a bit like reading an academic analysis of social relation in The Archers. In the former case it's all about supermums and pushy parents. This is predominantly because most of the evidence is qualitatively. I've no problem with this - it's all useful evidence for the realist synthesis. And on the education side, I know that the anxiety of middle class parents is widely known about. However, this body of work presumes that for all their pushiness and anxiety, the middle-classes are successful at, for example, getting more money spent on their child's education. The only evidence I've actually seen for this are a couple of ropey regression models from the states.

From what I know, schooling quality only impacts on a tiny amount of the eventual outcomes for children. So, it might not actually matter that middle class parents are pushy. What matters is income inequality. And if schools don't get more money from having a more middle class intake, why worry about pushy parents?
Posted by Dr Peter Matthews at Friday, May 27, 2011 No comments:

I'm in the midst of "re-reading" (more about those quotation marks later...) Michael Lipsky's 1980 classic Street Level Bureaucracy: Dilemmas of the Individual in Public Service. It's just been re-released with an extended update section at the end.

What is particularly powerful for me about it is, because it systematically goes through the contradictions and problems in bureaucrats lives, it offers a very effective critique of managerial and market solutions to the problems of policy implementation.

I have very little time for applying economic analysis to bureaucracies, or treating public services as if they are in a market, because they're not. The market has failed and therefore you have public services. Lipsky applies market analysis, but in a very constructive way, and reveals why you should not apply economics to bureaucracies. For example, when he asserts that demand for public services will grow with supply, this is economic fact. But it is then used to illuminate why bureaucrats are therefore not market actors. They are pragmatic decision-makers who struggle to make good decisions on the hoof.

I also have very little time for managerialism, from the left or right, that purports that if we just manage bureaucracies right then all will be well. Lipsky's analysis demolishes this concept. Bureaucracies just contain too many inherent contradictions for management to ever "rationalise" them away.

As such, what impresses me about the book is I think it offers for public policy what Adam Smith's The Wealth of Nations offers to micro-economics - a bloody good explanation of what is going on out there.

Now, those quotation marks. I did reference the book in my thesis very loosely. Actually, back then I'd just read the introduction, conclusion and a few pages in between. I tweeted this and discovered I'm not alone in the naughty behaviour. Anyway, I'm making up for it now by reading the thing, and I'm very glad too. Here's hoping my external examiner doesn't read this!
Posted by Dr Peter Matthews at Tuesday, May 17, 2011 No comments:

Historic development and concentrations of affluence

After doing my PhD on neighbourhoods with a concentration of deprivation, I've now turned my attention to affluent neighbourhoods. Just like poverty generally, we only get areas of concentrated deprivation because we have areas of concentrated affluence. Through my Twitter feed I came across the fantastic Addressing History site the other day, done by the lovely people at Edina. Noting that you could search by profession, I thought of the most quintessentially upper-middle class Scottish profession - advocates. And it's quite interesting. Just as the New Town in Edinburgh was coming into being you can really see that Edinburgh was still a very concentrated, mixed city. A lot of these advocates are in the Old Town to be near their work: 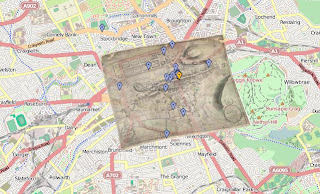 Sixty years later and the New Town is in full fettle and we seen a rather sudden swing as it becomes, as one Labour politician put it to me, "basically a middle class scheme". There's a few hanging on in there in the old town and a couple out in darkest Merchiston, but the concentration is striking: 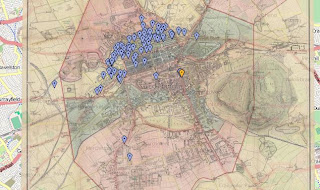 Now by the end of the century the New Town's hegemony as a neighbourhood is complete. You now can't be middle-class and not live there. Even the chap out in Merchiston is left on his own now: 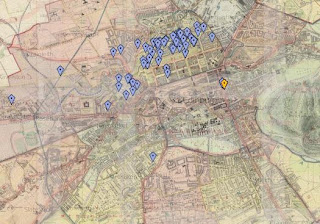 Thanks to Greener Leith I discovered local bourgeois pigs Forth Ports are planning on demolishing the wonderful Grade B listed Imperial Grain Silo on Leith Docks.

I usually don't bother commenting on planning applications but I thought I'd wade in on this one. It'll make no difference. Listed Building Consent application available here. And my suitably left wing ranting comment here:

"I strongly object to the proposal to demolish this Grade B listed building. In their report on the Imperial Grain Silo LDN architects have signally failed to show that there is no viable alternative to demolition.

The building is clearly of architectural and archaeological importance as the lengthy report by LDN demonstrates. Further, the building is close to a number of other listed structures in the docks (especially the dock structures themselves) that will also be harmed in their completeness contrary to policy Env 3 in the ECLP. The vast scale of the building also means it is a local landmark in Leith and across the city marking many views across the Forth.

The proposal is against policies in the Leith Docks Development Framework to protect and enhanced all listed buildings on the docks. It is therefore against Policy Wa1 in the ECLP.

The report offers a summary of alternative viable uses for the building, highlighting examples of student flats in Oslo and the Baltic Flour Mill. These are discounted as the archaeological engineering features of the present building are removed. This demonstrates a clear lack of imagination and the developers have clearly not exhausted ideas for viable development - such as a mixed use development that maintains some of the industrial features in an innovative way. This would maintain the modern architectural styling and some original machinery as noted in the building’s listing. The proposal has therefore not exhausted Policy Env 2 in the ECLP.

The report states that: “the proposal to construct a renewable energy plant on the site of the Warehouse is clearly of National economic and environmental benefit to Scotland and there is therefore a strong argument for the demolition of the Warehouse”. The environmental benefit of biomass to Scotland and the globe has yet to be fully proven and may well be negative. Further, the low power output of the docks (200Mwe) of the plant suggests it is just a means for Forth Ports to reduce their energy bills rather than “National economic benefit”. Siting the biomass plant at this site is also contrary to policy Emp 3 in the ECLP as this is not one of the proposed Business Development Areas.

The proposals for Leith Docks more generally derive from the financial state of Forth Ports. During the economic boom that ended in 2007, Forth Ports enjoyed soaring share prices and profits as the value of their assets increased. Dock lands that could easily get planning permission for new housing were the backbone of Forth Ports’ business model. This is clear from the dramatic shift in their approach to property and asset management through their annual reports from 2001-2005. Now the global recession has resulted in a drastic reduction in the price of their assets Forth Ports have realised that for short term economic gain and shareholder advantage they must return their docks to some semblance of industrial use – such as the biomass plant. This short term economic interest should not give way to long term planned commitments to Edinburgh and Leith as expressed in the LDDF."

N.B. my material considerations - the four local plan policies that are against it. If you want to comment against it, please feel free to be inspired by this rant, but please don't copy directly as this will null my comment as postcard campaigns (as they're known) just get counted as one objection. Is the quality of objections that matters, not the number.

And that's not a euphemism!

I came off my bike spectacularly this morning. I clipped a school kid's rucksack with my handlebars when he stepped into the cyclepath I was on and I went flying, removing substantial amounts of skin from my left hand and right knee. Luckily the kid was a right good Samaritan. Also, he luckily had a skin complaint so he had a hefty supply of plasters to bandage me up so I could make it to campus.

It reminded me of this post about da yoof of today I commented on recently. The kid who helped me was about 11-12 and I think if I'd done what he'd done at that age (and been confronted by someone as angry as I was!) I would've denied all knowledge, but he was genuinely really helpful. So, most of da yoof are very friendly and nice indeed. I've contacted the Head at the school I think he attends to say thank you and offered a tour of our exciting facilities up here (wave tank, anechoic chamber - basically all the bits I don't get to play with!). Made email of thanks made the headteacher's day!

If you ask very nicely I'll post a photo of my heavily bandaged hand after the very nice nurse at the GP practice on campus had tended to me.