Bike to work week - what my council is doing 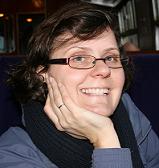 I'm getting into this guess post malarkey after the last one, so this week it's my colleague Caroline Brown (@DrCarolineBrown) (pictured) who has agreed to help me write this post with her review of Edinburgh's Quality Bike Corridor below.

So, it's Bike to Work Week. As followers are probably aware, that's a pretty normal week for me. As I've talked about on here before, I do a multi-modal commute, the vast majority of which is by bike. I vaguely enjoy cycling, would like to enjoy it a lot more, and journey times for me are about the same by bike as they would be by any other form of transport.

I've been quite critical of how my local authority - City of Edinburgh Council - manage their roads for cyclists, but since them and they're community planning partners are using Bike to Work Week to launch their Streets Ahead road safety campaign, I thought I'd see what their policies actually are.

From what I can gather (it's a bit tricky to follow), policy that is focused specifically at cyclist is spread between six different policies:
The fact that you have to read at least six policies to find out what provision should be made for cyclists says a lot to me - cycling is not a central part of the transport strategy and the way that the city designs its transport infrastructure. Yes, cycling is covered in many policies, but this fragmentation does suggest something of a strategic vacuum. Interestingly, the final policy - the Design Guide - which is mentioned in some of the other policies is seemingly no longer held on the Council's website. It's a shame that it's become this neglected as it's actually a very good policy. If all of Edinburgh's roads and cycle paths were designed in line with those guidelines there would be a massive increase in cycling (and I'd feel a lot safer).

The frustrating thing looking at all these policies is that Edinburgh Council clearly, in policy, do have a commitment to improving cycling infrastructure. They acknowledge the roads need safe cycle space on them if we are to increase the amount of cycling. But what do we get? This mess.

For example, the Active Travel Plan states that: "surface quality is especially important for bikes, which have minimal suspension. When reviewing carriageway maintenance priorities we will take this factor into account, increasing maintenance priorities appropriately."  Every cyclist in Edinburgh knows the state of the roads is just a joke. In fact, as I stated in a recent email to the Council about one stretch of road, it's beyond a joke; it's just dangerous. When your choice is to hit a gigantic hole and fall off, or cycle down the middle of the road, then the aims of the Active Travel Plan are not being met.

And after a recent trip to the Netherlands, I'm now even more convinced that we need to "go Dutch". I was staying in Amsterdam, just around the corner from here. It took me a wee while to realise that, since they've prioritised the two bike lanes (both wide enough for two bikes to ride side-by-side comfortably) the road was actually almost too narrow for two cars to pass. The bike lanes also run alongside the car parking spaces, so cyclists weren't in danger of hitting a parked car. The bike lanes also go around the back of the bus stops. Even so, the road next to the bus stop was slabs of concrete so the tarmac wouldn't end up looking like crumpled newspaper.

I cycle up Easter Road every morning - a road which is probably equally as busy as that Dutch road - and it looks like this. Across that width of road there is absolutely no excuse for not prioritising cycling on an equal footing as cars. But we just get two advanced stop lines and these aren't there at the two stop lines where they would probably be most useful.

A major part of what Edinburgh are trying to do to help cyclists is contained in the Quality Bike Corridor. Caroline Brown lives in that part of town so she's provided me with this review of this model provision (with photos)

The City of Edinburgh Council says ‘A Quality Bike Corridor from George IV Bridge to King's Buildings is now under construction by the Council. The corridor will include new cycle lanes and bus lanes, and changes to the parking and loading restrictions along the route so that these lanes aren't blocked as often by stationary vehicles.’

The leaflet promises a lot – new bike lanes, new bus lanes and reorganised parking. It’s a great idea, and it is good to see:

More cycle parking along the route 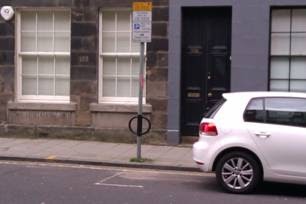 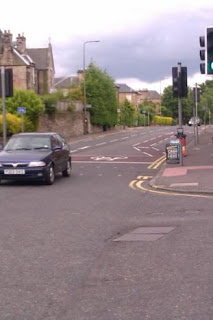 Painting lines on the road does little to change the habits of drivers who park where they like.... 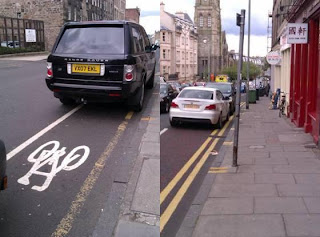 [The driver of this white BMW did at least move when I pointed out that she was parked on double yellow lines AND a cycle lane. Note the completely empty P&D parking bays only a few metres further down the road... !]

And I doubt very much whether the forest of new signs that is springing up along the route will do much either.: 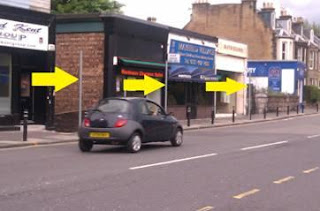 Why is it necessary to have all these poles foresting the pavements? What do they do for cyclists? CEC seems to have a very bad case of street sign-itis, as you can see here: 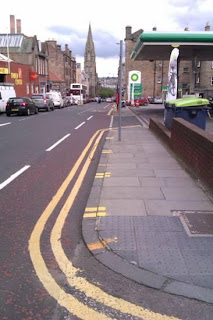 Not only is this short stretch of kerb painted to distraction, it also has a sign! Note how the placing of this sign now creates a pinch point on the pavement. Multiply this by a zillion, and that means the QBC is bringing with it a zillion more obstacles for pedestrians along its route. That doesn’t help with the outcomes the QBC is supposed to be addressing:
National Outcome 6 – ‘We live longer, healthier lives’
Local Outcome – Active travel, namely walking and cycling, allows people to integrate health promoting physical activity into their daily lives
Supports National Outcome 10 – ‘We live in well-designed, sustainable places where we are able to access the amenities and services we need’
Supports National Outcome 12 – ‘We value and enjoy our built and natural environment and protect it and enhance it for future generations’
Supports Local Outcome – Edinburgh residents and businesses find sustainable travel options increasingly attractive resulting in growth in traffic levels being contained.

So, to return to the issue of cycle parking: while it’s good to see cycle hoops along the route, given the width of the pavement along Ratcliffe Terrrace, these also have the potential to simply create more obstacles for pedestrians. 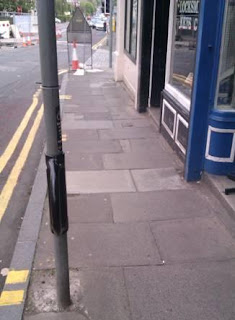 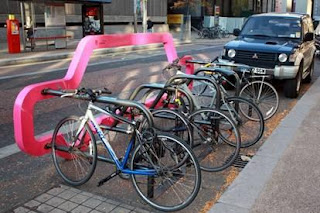 Finally, looking back to the consultation leaflet about the QBC, it is clear that implementation is far from complete. Presumably things are being phased in a logical way; but there is no information about this on the CEC website, and no info about when things are supposed to be completed. As a result, the QBC is currently a dogs dinner of half painted and half implemented ideas. It is full of good intentions, but let down by: poor road surfaces; poor enforcement of parking controls; the ‘advisory’ nature of the cycle lanes; and, the forest of poles, signs and other pedestrian obstacles appearing along its length.

To be honest, the creation of a joined up route of cycl lanes, parking controls and increased cycle parking will be an improvement. However, the quality bike corridor could be more than that – a demonstration route where cyclists and pedestrians are given more space and more priority, and cars and parking are given less space and less priority. Imagine it: 20mph along its length; a dedicated cycle lane which is uninterrupted by parking bays; wider pavements; a narrower carriageway, oodles of cycle parking. That would be the start of a real revolution.

Thanks Caroline - and I have to agree with her. While it seems Edinburgh's policy could be revolutionary and really prioritise space on the roads for cyclists, we actually have very poor quality provision, that puts lives in danger, and prioritises high speed motor traffic over anything else.
Posted by Dr Peter Matthews at Friday, June 22, 2012