What I see in pretty pictures

I "pimped" my blog recently to make it look slightly less like I'd set up it one hour, one afternoon in January. I've added a sidebar which includes some of the blogs I follow, just over there>>
One I really like, and one of the reason's I started this is Under The Raedar the hilariously titled blog of the very nice, very intelligent Alasdair Rae, down at Sheffield. Not long after I started, his blog got picked up by the Guardian data for some mapping he did of the English Index of Multiple Deprivation. This impressed me, so I thought I'd have my own go. Alasdair does amazing things with data and images I could only image doing. His recent post about relative Chinese, US, and European population densities will definitely make an appearance in one of my lectures.

I can't say I'm as good with data, but I did find the recent Scottish Government housing and regeneration statistics interesting, especially demolitions since 1991. Here's two graphs what I did copy and pasted out from Excel (clickify to embiggen): 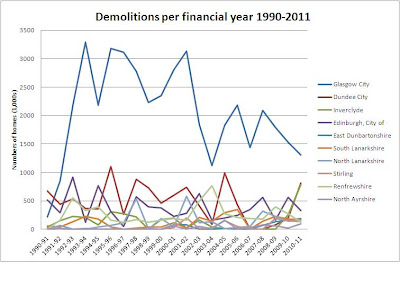 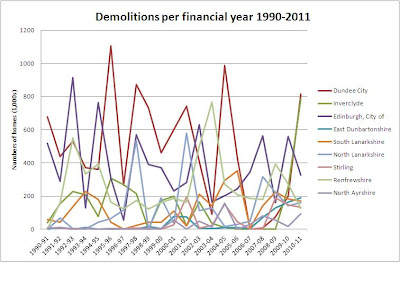 The first includes Glasgow (largest authority, largest landlord, largest number of demolitions) and the other top 10 demolishers. The next one takes Glasgow out to show some more of the noise at the bottom. If you read the notes with the data, you'll see this is mainly demolitions of local authority housing or social housing as it's very difficult to record demolitions of private dwellings, even though you're supposed to apply for planning permission.
Doing these, and linking this with Alasdair's work, I was wondering how you'd "read" this data. You might be shocked that so many homes have been demolished over the past 20 years in Scotland. For me, it's a story of regeneration strategies. If you look, Glasgow, Dundee and Edinburgh, peak in demolitions in the early and then late 1990s. These local authorities were the site of the four New Life for Urban Scotland partnerships between 1989-1999, which prioritised housing renewal. So this represents this activity. Across the board there's a pick-up in most local authorities from the mid-1990s as the Conservative Scottish Office started Programme for Partnership, with Priority Partnership Areas (a bit like the New Life Partnerships). Just after devolution, in the late 1990s and early 2000s, activity picks up again as capital spending is prioritised to social housing by the new Scottish Executive and its Social Inclusion Partnerships. Finally, after 2003 Glasgow's demolition rate shoots back up every now and then as the Glasgow Housing Association starts its housing renewal work. I also see quite how big some multi-storey blocks of flats are, as I imagine some of those massive peaks in the major cities are just two or three blocks coming down.
What do you see?
Posted by Dr Peter Matthews at Friday, September 23, 2011